Our team began designing our first product, Catacombs™, in early 2008. After extensive design, development and play testing, it was published under the Sands of Time Games imprint in March 2010 and sold out within six weeks. As the first fantasy, dexterity “dungeon crawl” tabletop game, it won the BoardGameGeek.com award for most innovative game of 2010 and won the Dice Tower best innovative game award for 2010.

In April 2014, Elzra™ ran a successful Kickstarter campaign for Catacombs Third Edition featuring more content, updated rules, new mechanics and illustrations by then unknown game illustrator Kwanchai Moriya. The campaign updated the Cavern of Soloth expansion to the new artwork style and introduced a new Kickstarter exclusive expansion Crypt of Shaurath™. When the base Catacombs Third Edition game was released to retail in 2015, it sold out at wholesale within days. Catacombs Third Edition received the Dice Tower Seal of Excellence and the “Reference Pear” award from Shut Up & Sit Down. Schwerkraft-Verlag released a German language edition of the game.

In January 2016, the company announced the Kickstarter campaign for their next title in the expanding world of Catacombs: Catacombs & Castles™. This campaign successfully finished at the end of June 2016 and was fulfilled in 2017. The second printings of Catacombs Third Edition and the Cavern of Soloth expansion were produced during this time as were two additional expansions: Siege Defender™ and Keystones & Keeps™. Due to popular demand, Kickstarter content from the first campaign were printed in the form of three Resurrection Packs. Catacombs & Castles received the Dice Tower Seal of Excellence and was selected as one of three “critical hits” by the Cardboard Herald for 2017. The game demonstrated strong retail sales and is sold out pending a reprint. Again, Schwerkraft-Verlag released a German language edition of the Catacombs & Castles game.

Also in 2017, a new expansion for both Catacombs Third Edition and Catacombs & Castles was released called Wyverns of Wylemuir which enabled players to ride dragons (wyverns) in both games. This expansion was well appreciated by fans of the Catacombs series and also received a Dice Tower Seal of Excellence.

In July 2017, the company launched the Kickstarter campaign for Catacombs Conquest™, a card game with dexterity mechanics. The game serves as an introduction to Elzra’s Dexterity Game System which is used in all of its dexterity based titles. The campaign was successfully funded and fulfilled in April 2018. A companion neoprene playmat (or Deximat™ as the company calls them) Lenore’s Cave was released to retail in July 2018.

Catacombs Cubes™ from game designer Ken Valles and illustrated by Denis Martynets was released in 2020 and received a Dice Tower Recommended award. 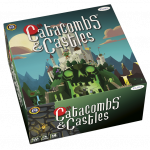 The second of Catacombs & Castles launched on Kickstarter on March 9th, 2021.

Elzra is a member studio of the Indie Game Alliance (IGA).

Elzra’s product line is carried by the following distributors: